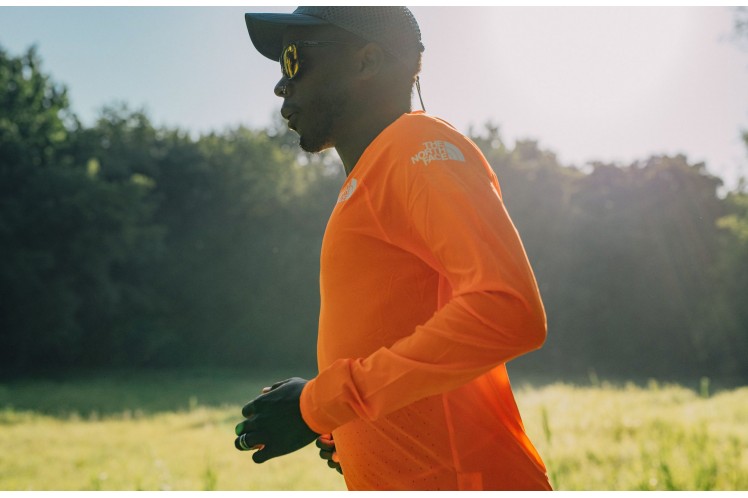 When Coree Woltering decided to run 1,147 miles over 21 days, he expected rolled ankles and inflamed ligaments—those were the norm.The most mentally demanding aspect of his 2020 FKT success on the historic Ice Age Trail in Wisconsin, rather, was something a lot of Wisconsinites can understand: bugs.

“I was only eight miles into the second day and I walked out of the woods and told my crew I was done,” Woltering laughs. “I had 40 ticks covering my legs and I didn’t want to deal with it.” As Woltering’s crew convinced him to continue, an Instagram follower reached out with a tip for The North Face runner: Wrap duct tape around his ankles—sticky side out—so the ticks get stuck on the tape. “It went from being an issue to something I never even noticed,” Woltering remembers with his characteristic amiability. This was one of the many instances during his bid for the fastest known time (FKT) that Woltering experienced the bona fide Midwestern kindness he hopes to spread throughout the rest of the running community.

Woltering hails from Illinois, a state more recognized for corn fields and deep-dish pizza than mountainous terrain and singletrack. Combine that with his identity as an openly gay Black man in a sport jam-packed with straight white dudes, and it’s clear that Woltering epitomizes a recent divergence from the long-haired athletes wearing trucker caps more traditionally seen in the ultrarunning community. But he embraces his individuality with an enviable optimism and unique ability to adapt to any situation.

Ultrarunning wasn’t Woltering’s first love. He competed in triathlons in college, and qualified for Ironman World Championships twice, in 2012 and 2013. But after graduation, he moved to Boulder, Colorado, arguably the epicenter of trail running in a state known for iconic-yet-grueling events like the Leadville 100 and the Hardrock 100. With ultrarunning legends like Scott Jurek and Anton Krupicka calling Boulder home, it wasn’t long before Woltering befriended a group of trail runners. One of these buddies asked Woltering to pace for him at the upcoming Leadville 100 trail race. Woltering thought the distance sounded miserable and arduous, but he did it anyway. He walked away with a new appreciation for ultrarunning.

“I loved being on the trail, and I loved the training my friend was doing,” Woltering says. He paced the Winfield-to-Twin Lakes segment, marveling at the scenery from the high alpine and thriving on the overall camaraderie among runners.

But it was 52 seconds that changed everything. In preparation for his own attempt at Leadville, Woltering had registered for the 2015 Silver Rush 50-miler, where he placed fourth, missing out on the podium by 52 seconds. This fraction of a minute ignited an internal fire.

“It was one of the best and worst things to happen to me,” he says. “On the good side, I was less than a minute off people who had done this stuff before. But it was only 52 seconds. I never felt competitiveness until those 52 seconds.” After that, Woltering was hooked: Trail running was his future.

Woltering won every trail ultra he signed up for in 2015, standing atop the podium in the Malibu Canyon 50K and the Tunnel Hill 50 Mile, among others. But while his career was taking off, something was missing from his personal life: his support system. He relocated back to Illinois to be with his now-husband, Tom Aussem, trading high-altitude training and technical singletrack for proximity to family and a return to his roots. Just prior to Valentine’s Day in 2016 and months before their summer wedding, Woltering came out as gay to his followers on Facebook. A few days after his announcement, he shaved nine minutes from his marathon personal best at the Mercedes Marathon in Birmingham, Alabama, running a 2:28. At the Chicago Marathon in October, he knocked that down to a 2:26. Later, at Tunnel Hill in November, he clocked the second fastest trail 50-miler in North America that year. An emotional weight had been lifted. Now, Woltering felt like he could fly.

“Part of the reason it took me so long to come out was the fact that I didn’t have any bigger sponsors at that point,” he says. “I didn’t know of any Black professional ultrarunners, so to add Black and gay into it…I didn’t know if any companies could handle it.”

“I DIDN’T KNOW OF ANY BLACK PROFESSIONAL ULTRARUNNERS, SO TO ADD BLACK AND GAY INTO IT…I DIDN’T KNOW IF ANY COMPANIES COULD HANDLE IT.”

However, once he settled back in the Midwest, Woltering realized that coming out wasn’t even close to the most difficult of his career challenges. The toughest thing he had to face was his location. First of all, the weather requires exceptional toughness. “Summers are 105 degrees and winters are –5 and harsh. You just learn to get through it,” he says. Woltering also needed to battle the lack of banner races in his region and the trail-running community’s bias that the Midwest wasn’t for serious trail runners. “It’s especially hard early in your career when you’re trying to get noticed,” he explains. “Companies expect you to race the bigger races.” Unfortunately for Woltering, those events didn’t take place in the central part of the country.

So he got creative. Since he didn’t acquire any sponsors until 2017, Woltering’s budget dictated his schedule. He initially prioritized convenience and affordability for all of his events, so his early days found him racing in the north-central Midwest, frequenting races like the Tunnel Hill 50 Mile in Illinois or the Superior 100 Mile in Minnesota. He would drive to the race the day before with Aussem, sleep in the back of the car, and then run. To garner attention, he highlighted the region’s signature hospitality, packing a puffy jacket, comfy shoes, and sweatpants so he could hang at races for hours after he finished. He’d wait for runners who finished long after dark, enthusiastically chatting about the course with his new acquaintances. “We joke that a Midwestern goodbye will take you six hours, but it’s so true,” Woltering laughs. “Take me to any race and you’re going to be there all day, all night, and maybe into the next morning.”

While enjoyable and accessible for his geography, these events were rarely the marquee races prioritized in the ultra community—a fact Woltering finds frustrating. “We have some talented athletes here who don’t get exposure and coverage because of where we live,” he says. But he predicts this will change as the United States emerges from the pandemic. “Local races are going to be the backbone of ultrarunning for awhile,” he says, underscoring that many athletes won’t be traveling until COVID-19 is completely under control. Woltering notes that this evolution is already afoot with USA Track & Field (USATF) which has recently awarded national championships to races in New England and the Midwest rather than usual West Coast locations. “It’s been awesome getting folks to the Midwest or the East Coast for races,” he says. 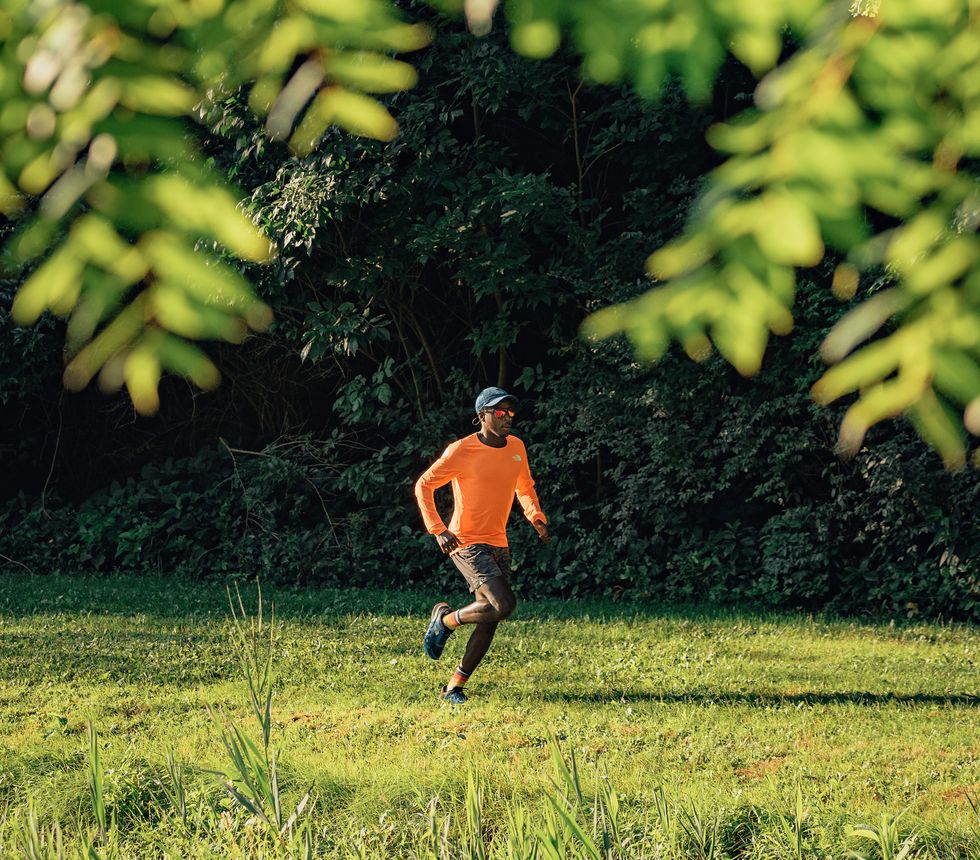 He’s also noticing changes regarding racial diversity in his predominantly white sport, referencing his sponsor The North Face as a brand focusing on inclusion with their athlete team. Still, Woltering admits to feeling constant pressure due to the color of his skin. He doesn’t recall dealing with overt racism during his career, but he says it always sits at the forefront of his mind. He frequently reminds himself to stay calm so he isn’t labeled an “angry Black guy.”

“If the top runner from another team happens to be white and is having a bad day and freaks out, it’s like, ‘Oh, so-and-so just had a bad day,’” he explains. “But as a person of color, if you have a bad day and freak out about it, people think, ‘What’s up with him? He’s such an angry man.’”

The Ice Age Trail was the first major trail Woltering found for training after his return to Illinois in 2016, so it’s been on his radar for a few years. When the pandemic hit and national races all canceled, the time was ripe for his FKT. He began his journey a few days after the George Floyd shooting, as racial unrest spiked across the country. While briefly concerned for his safety while running through isolated pockets of the Midwest, he experienced nothing but generosity and kindness during the endeavor. Woltering encountered friendly locals who stopped by to support his attempt by accompanying him on small segments or supplying him with red velvet cupcakes. At one point, a 3-year-old boy who had already section-hiked 150 miles joined Woltering to run through his favorite element: a tunnel just beyond the West Bend segment. “He was giving me advice on how I should run the trail,” Woltering remembers from the rainy day. “Telling me I should go through the mud and not the water because it’s less slippery. It was so cute and so funny. Honestly, that dude is going to be the FKT holder of the Ice Age Trail when he grows up.”

“I DIDN’T SEE PEOPLE THAT LOOKED LIKE ME WHEN I WAS GROWING UP.”

Still, Woltering understands the importance of his platform as a professional athlete, especially for the next generation of trail runners. “I didn’t see people that looked like me when I was growing up,” he says. “I think it’s really important to be that kind of role model so kids can see me and say, ‘Hey, I’d like to try that.’” In addition to coaching budding athletes, Woltering is also participating in a 2021 mentorship program with The North Face, with a goal of encouraging ultrarunners from marginalized communities. “I really feel like going out and doing is one of the best ways to show it, because that’s my story,” he says.

As his star rises, Woltering is traveling farther from home. Last year, he raced in the Eco-Challenge Fiji as part of the first all-Black team to participate in the event. This September, he is aiming even higher as he attempts to set the FKT on the southbound route of the Appalachian Trail. But even as his talent takes him across the globe, his heart remains in the center of the country.

“It must be that Midwestern charm,” Woltering says.

Note: In early April 2021, Woltering set a new FKT on the Pinhoti Trail in Alabama and Georgia, with a time of 127 hours and 22 minutesover 349 miles. 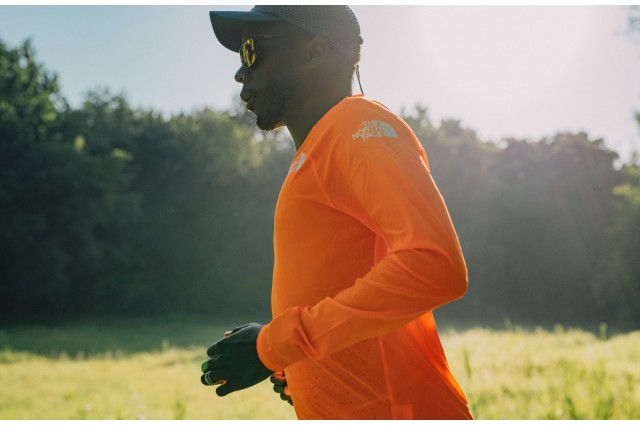 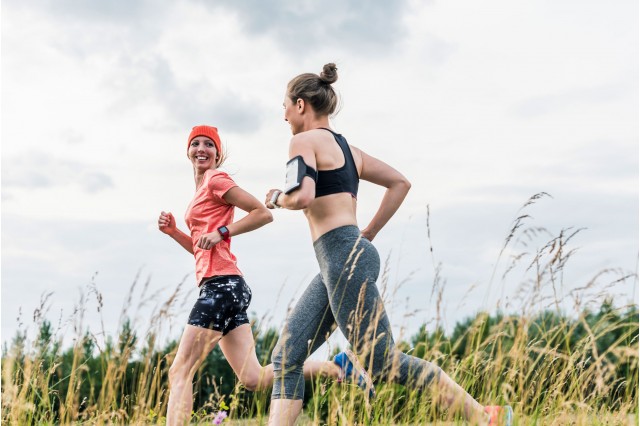 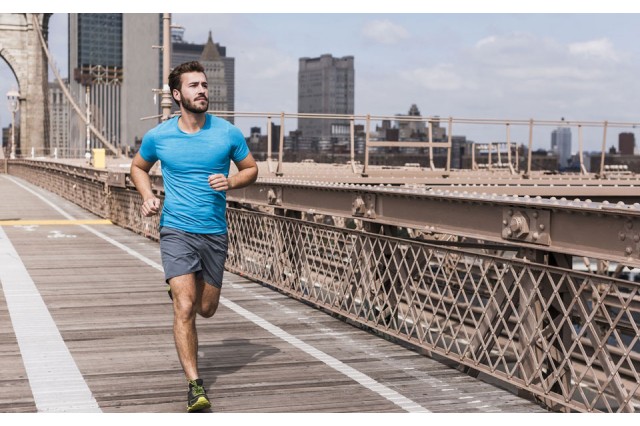 What Does Running Do to Your Body?
YOU NEED THESE WEIGHTED SUPERSETS WHEN YOU’RE SHORT ON WORKOUT TIME 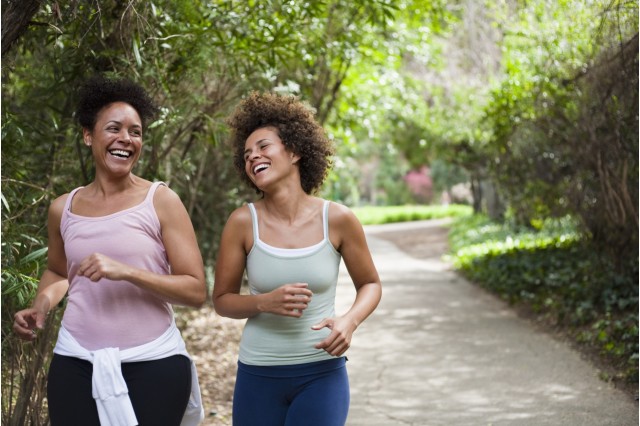 How Fast Should I Run as a Beginner? 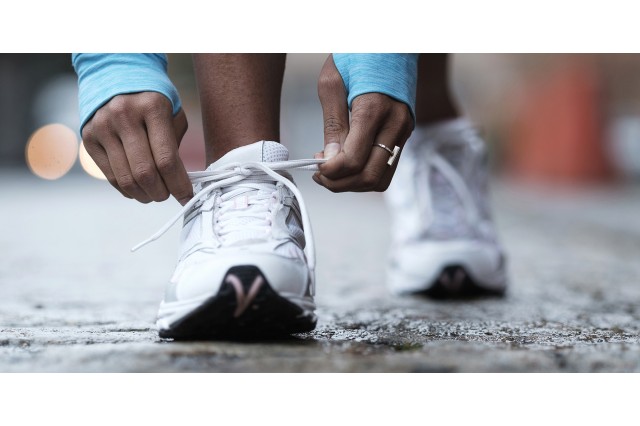